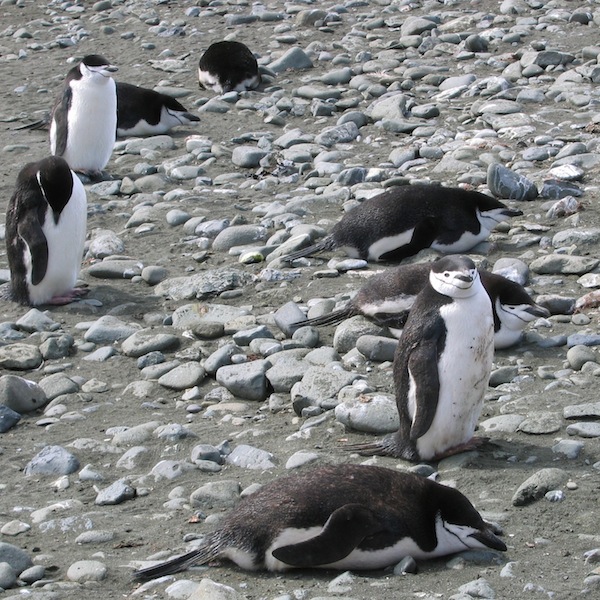 Tourism and its impact on endangered species is, not surprisingly, one of the themes of The Tourist Trail.

It’s not a simple issue. In the case of the Magellanic penguin colony at Punta Tombo, more than 100,000 tourists now visit the site annually, which can (and sometimes does) overwhelm the birds. But the fact that so many tourists visit helps ensure that the government isn’t likely to cut another back-room deal with the Japanese to slaughter penguins to manufacture women’s gloves (yes, this very nearly happened).

Further south, in Antarctica, there has been concern that tourist landings on the islands have caused penguin colonies to decline in number due to undue stress. The dedicated researchers at Oceanities have been studying this issue for many years.

They reported recently that tourists do not appear to be responsible for declining penguin populations.

The actual culprit is the warming waters.

Oceanities conducted extensive surveys on Deception Island — a heavily visited island that served as a test case for analysis. Oceanities also studied colonies on islands that see no tourists at all to look for any noticeable differences.

The National Science Foundation  reported on their work. Here are a few excerpts:

“We now know that two of the three predominant penguin species in the peninsula–chinstrap and Adélie–are declining significantly in a region where, in the last 60 years, it’s warmed by 3 degrees Celsius (5 degrees Fahrenheit) annually and by 5 degrees Celsius (9 degrees Fahrenheit) in winter,” said Naveen. “By contrast, Gentoo penguins are expanding both in numbers and in range. These divergent responses are an ongoing focus of our Inventory work effort.”

There has been speculation that tourism may have a negative impact on breeding chinstrap penguins–especially at Deception Island’s largest chinstrap colony, known as Baily Head.

Naveen oversaw the Deception Island census effort. Lynch, the Inventory’s chief scientist, undertook subsequent analyses. The results and analyses, according to Lynch, shed new light on the massive changes occurring in this region.

“The decline of chinstrap penguins at Baily Head is consistent with declines in this species throughout the region, including at sites that receive little or no tourism; further, as a consequence of regional environmental changes that currently represent the dominant influence on penguin dynamics, we cannot ascribe any direct link in this study between chinstrap declines and tourism.”

Adds Lynch, “While there has been considerable focus in the policy and management community about the potential impact of tourism on these penguin populations, we cannot forget the overwhelming evidence that climate is responsible for the dramatic changes that we are seeing on the peninsula. If tourism is having a negative impact on these populations, it’s too small an effect to be detected against the background of climate change.”

It’s a shame in a way that tourism isn’t to blame here, because it would be so easy to stop tourists from stepping off those boats.