They just don’t seem like big changes at the time.

When it comes to veganism, I’m always on the lookout for these changes.

A celebrity announcing that he or she has gone vegan.

That’s not a big change.

But when a major retailer begins highlighting vegan products, that’s a big change.

It’s a sign that more and more people are putting their wallets where their values are.

Take the simple act of finding a pair of vegan shoes.

The easiest approach is to shop at an all-vegan store, like Moo Shoes.

But what about the more mainstream online stores, like REI?

About six months ago I noticed that REI had developed a “vegan” filtering option for men’s shoes, shown here: 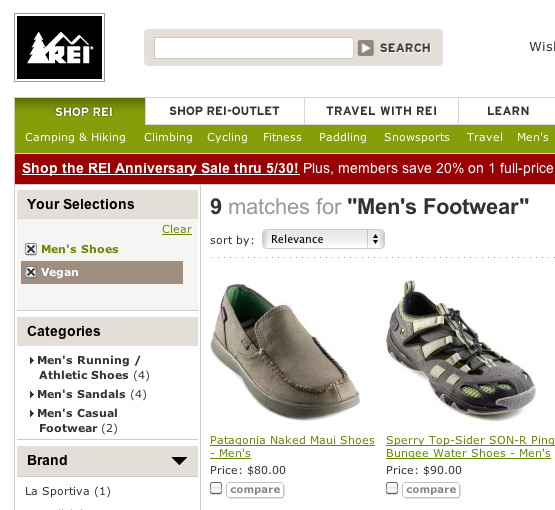 At the time, there were maybe 11 shoes in this category.

I just check again today and, there are now 38 vegan shoes available. I think the increase is partly due to shoe manufacturers focusing on producing vegan shoes — as well as making a point of labeling vegan shoes appropriately. For example, many running shoes are already vegan, but not labeled as such (though Brooks does a very good job in this regard).

Zappos also now offers a vegan sort option (though it can be challenging to find). 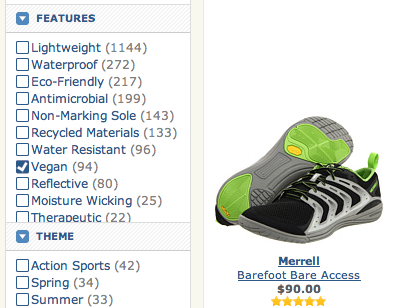 This is a new feature — added over the past six months.

Now what about Amazon (the parent company of Zappos)?

Six months ago, Amazon was headed in the right direction.

Here is a screen grab of Amazon offering a small selection of “vegetarian” shoes. 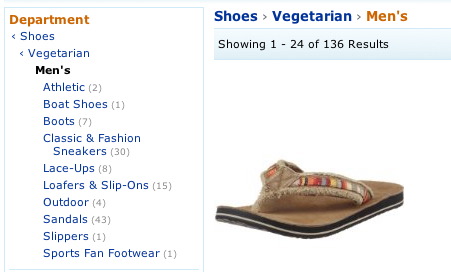 Vegetarian? Does that mean these shoes might include cheese or butter?

Clearly, Amazon was still figuring things out — and, apparently, simply gave up. Today, there is no vegetarian or vegan filter for shoes.

But Amazon has invested heavily in offering vegan food, as shown here: 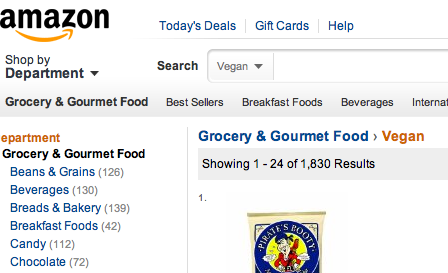 So it’s just a matter of time until Amazon adds a vegan search option to more products.

Veganism is good business, and a growing business.

And these changes, small as they may seem, are big.