I read yesterday that Brian Gordon, Major League Baseball pitcher for the Yankees, became the first player to use a 100% non-leather glove. 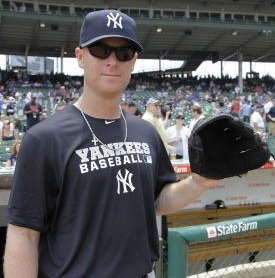 This may seem like a trivial detail, but it’s not. Leather has long been viewed as the best material for many sports-related products — from shoes to gloves to the balls themselves. And this is still largely the case, but Brian’s glove is a significant change. Sports stars influence millions of young people around the world. And you can bet that future pitchers who want to follow in Brian’s footsteps are going to take a close look at a synthetic glove.

The maker of the glove Carpenter Trade Company writes:

Leather in gloves 50 years ago held up better and longer than leather used today. The reason is that cattle raised for slaughter 50 years ago were usually raised naturally—meaning they roamed in open fields, ate grass, and were slaughtered at a mature age (about 5 years). Today’s leather usually comes from factory-farmed cattle. These animals are confined to feed lots where they don’t build muscle or thick hides. They are fed unnatural, fattening diets of grains supplemented with growth hormones. They go to slaughter at a young age (about 14 months). The resulting leather is inferior. While animal leathers have gotten worse, man-made leathers are always advancing.

The time for synthetics in professional baseball gloves has come. Each year more synthetics are being used in parts of Major League gloves. Star players such as Roy Halladay and Alex Rodriguez are opting for synthetic backs. Welting, lining, and padding are increasingly made with synthetics by most brands. The newest synthetics are out-performing leather. Completely synthetic gloves will be an industry standard in the future.

The case for avoiding leather — saving animals — often falls on deaf ears. But when you add the fact that synthetic materials can be more effective than leather — you will quickly find an audience among athletes.

Personally, I can attest that running shoes have followed a similar path of evolution. When I took up running back in the dark ages, leather running shoes were the norm. But leather shoes are heavier. And weight is not a good thing when it comes to running.

Today, you’d be hard-pressed to find a leather running shoe. They exist, but mostly as “retro” shoes, not as something a professional would use.

I recommend Brooks shoes — in which every one of their shoes but one (the Addiction walker — a rather ironic name) is vegan.

It’s an amazing shoe, and a sign of things to come.

Yes, we’re still in the early days. I realize that leather is everywhere and still tightly associated with luxury products and “manly” products.

But small changes are happening all around us.

And that’s how major changes happen. In small steps, repeated by hundreds, thousands, and, eventually, millions of people.