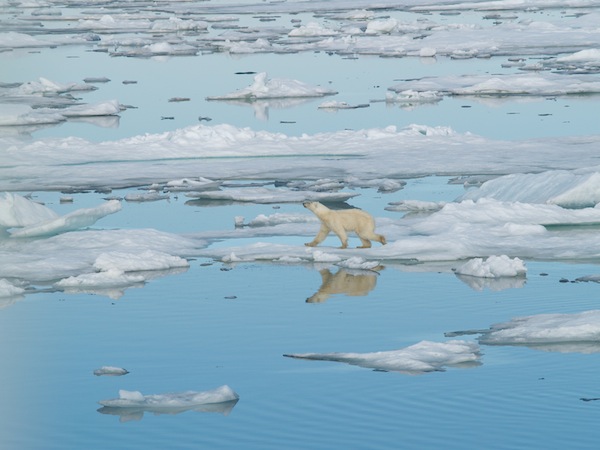 So now the questions begin: What caused the death of the celebrity polar bear Knut?

Early indications point to some form of brain disease.

Zoo officials deny this, of course.

But when I look at the photo of the polar bear above, I think the question should be: Why don’t more polar bears die in captivity each year?

In the Arctic, polar bears roam hundreds of miles as virtual loners. This is in their DNA, this life of freedom and solitude. So when one is raised in a confined cell and subjected to hundreds of thousands of people taking pictures and shouting, how does any polar bear survive this? Just the smells must be overwhelming. A polar bear can pick up the scent of food a dozen miles away; how does it cope in an environment in which it is surrounded by smells, overstimulated to such a degree?

When I was a child I was always bothered by watching the large animals at the zoo. The way they paced back and forth. Even then I suspected something wasn’t right. Now I know something isn’t right.

Zoos shouldn’t be in the business of keeping large animals in small containers. From lions to whales to polar bears, zoos don’t give them the room they need. Perhaps no container is large enough.

Perhaps we don’t need zoos any longer. I wouldn’t miss them.

The major argument I hear in support of zoos is the educational value they offer to young children. If Billy doesn’t get to see a polar bear up close, the argument goes, how will he come to appreciate nature? And yet this argument fails to account for the fact that Billy isn’t witnessing nature, just some watered down version of it. A video of a polar bear in its element is of far more educational value, as it shows the polar bear doing what it does naturally. And it shows the importance of seals and ice and ecosystem, lessons that are going to be critical to ensuring we protect this planet for generations to come.

There is another argument in support of zoos that points to all the good things they do for animals — for helping species bounce back from near extinction. For breeding animals that had failed to breed successfully in the wild. These are far stronger arguments in support of zoological programs, but not necessarily zoos.

I’ve been reading Fear of the Animal Planet

— a book that details countless abuses of animals by zoos and circuses alike, so maybe I’m too jaded.

But today I read that Berlin zoo officials plan to have Knut stuffed, adding insult to injury. Even in death he is not given a moment of peace.