NPR ran a segment about a recent study that found that the metal wing bands used to tag King penguins put them at a disadvantage in the water.

Penguins fly through the water. It may be difficult to picture an animal that waddles across the land hitting 15 miles per hour in the water, but they do it. And if you think of a penguin as a bird in flight, it’s not hard to imagine how a piece of metal fastened to its wing could slow it down. In the water, speed is everything; penguins depend on their speed to be successful in feeding and to outrun predators.

According to the NPR article, Antarctic researchers:

… put traditional metal bands on 50 King penguins that live near Antarctica. Fifty others had much smaller radio-frequency transponders. Ten years later, the survival rate for banded birds was 16 percent below the unbanded birds.

Yvon Le Maho, the chief biologist, says at first there was little effect. Then during the first 4.5 years, survival rates for the banded birds dropped about 30 percent below the unbanded birds.

“In other words, only the superathletes are surviving,” Le Maho says.

Dee Boersma, a researcher who has been banding Magellanic penguins for 30 years, was also interviewed for the NPR piece. She pointed out that not all penguin bands are created equal. And she stressed that “eliminating all tags would be throwing the baby out with the bath water.”

Here is a picture of a band used on Magellanic penguins. I placed a pen next to it for context. 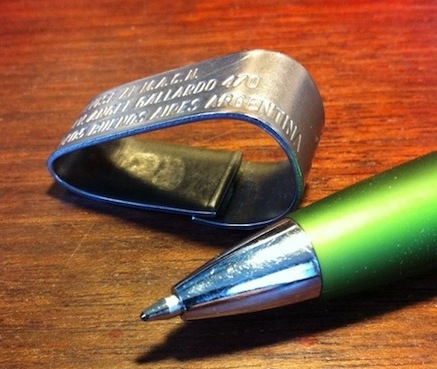 I’ve often wondered about the negative effects of penguin bands and satellite transponders. It’s an issue I wrote about in The Tourist Trail.

But I think it’s worth mentioning that these the super-small radio transponders weren’t available ten years ago. Researchers made do with the best technology they had at the time. And the metal bands were the best technology at the time. Looking ahead, I’m sure researchers will take advantage of the smaller tags when they can afford to (funding is always a major obstacle).

It’s also worth mentioning that because of the tags that Dee used (metal bands as well as radio transponders), she has been able to study generations of individual penguins. She knows how long they live, how far they travel in the water, and she knows where they go for food. Without data like this, how do you begin to convince a government to keep ships from traveling through major penguin feeding areas? How do you cordon off feeding areas from fisherman to prevent penguins from getting caught up in the nets?

I’ll leave you with an excerpt from The Tourist Trail (it opens when two researchers, Angela and Doug, are applying a large satellite transponder to a penguin):

What’s the point of tracking them, Doug added, if the act of doing so reduces their numbers?

Fishing nets do more damage than these devices will ever do, Angela told him.

This they knew from the dozens of flipper tags they received each year, mailed anonymously from the fishermen who obeyed the Avise al request stamped on the back of each tag. Some tags arrived carefully flattened out by hammer, easier to slip into an envelope; others arrived intact, little thin triangles. And Angela always wondered how many tags were left on those ships, or at the bottom of the sea.

Her life was consumed with attrition and its causes. The unreported oil spills, evidenced by the blackened, shivering birds that staggered upon the shores. The plastic six-pack rings that doubled as lassos. The baited long lines, meant for large fish but difficult for any species to resist. And the most acute and least visible cause of all—the food supply. Penguins depended on anchovies and krill, once abundant and ignored by fishermen, now in demand at salmon farms and for multivitamins. Like penguins, fishermen aimed for the food nearest to shore, and because they were more efficient and rapacious, penguins were forced to forage farther and farther from their nests, diminishing the odds of a successful return.