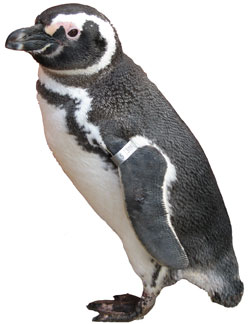 One of the principal characters in The Tourist Trail is a penguin. He goes by the name of Diesel.

Diesel is based on a very real penguin named Turbo.

Turbo is now a celebrity of sorts. He has his own web page — and his own Facebook page. I expect a movie deal is forthcoming.

Why is Turbo so special?

Penguins are largely indifferent to humans, but Turbo is different. He seems to enjoy hanging out with humans. Nobody feeds him, mind you. He’s not in it for the food. And, unlike his brethren, he won’t bite if touched.

I had the pleasure of meeting Turbo several years ago.

Here’s my fictional take on Turbo, aka Diesel:

The first time Angela heard his knock, she’d opened the door, and he’d hobbled over to the bookcase, peering at the Patagonian field guides as if he had a book in mind. His breath was raspy, like a purr, which she had never noticed outdoors on the wind-deafening hills. Angela had stood by the door, holding it open; Emily sat at the desk. They remained motionless as Diesel toured the cramped room, investigating every eye-level oddity—the half-open file cabinet, mud-stained Wellingtons, a pile of knee pads, a fire extinguisher. She imagined him as an explorer among penguins, one given to researching humans. Off alone in the field, sacrificing his childbearing years, all for the greater good of knowledge. What notes would he take? The humans are easily approached, yet spastic in nature and prone to outburts. They seem oddly attracted to Punta Verde. Most visit for a few hours and are gone again. Perhaps the land is of spiritual significance. Tagging them will prove challenging.
Diesel had returned to the bookcase and looked up at Angela. He wasn’t about to leave on his own, and if she could have gone back in time, to that room on that morning, she would have closed the door instead of ushering him back outside.