What’s a krill you ask? 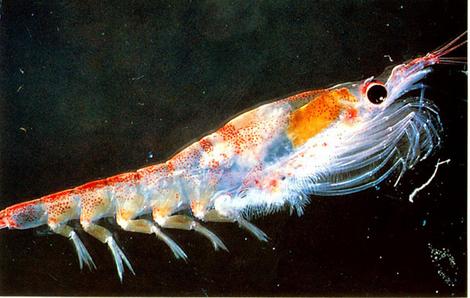 The penguins of the Southern Ocean depend on krill for their survival. But warming temps and overfishing are depleting the krill stocks, which appears to be the greatest threat to these penguins.

Krill need winter ice to survive but because of rising temperatures on the peninsula and in the waters that surround it, the area is ice-free for about four months each year, Trivelpiece said. Probably as a result, he said, winter stocks of krill have declined 80 percent in the past 20 years.

Prized as a component of fish food and nutritional supplements for people, krill are commercially harvested by factory trawlers, and the annual catch of this species rose in 2008 to 150,000 tons, from about 100,000 tons in 2007, according to the Pew Environmental Group.

How do ships catch krill? Nets. Large vacuum hoses. And because krill don’t exactly have a devoted following of environmentalists, who will complain if they disappear?

But everything is connected.

Whales too depend heavily on krill.

In my novel The Tourist Trail, I write about penguins and whales and the dangers they face. And I write about the brave people around the world who will go to any length to protect these creatures. But we must also protect the krill.

When we lose the krill, we’ll lose so much more.